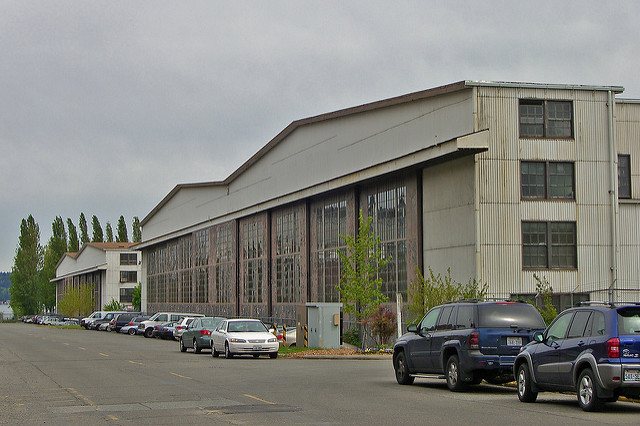 The history of Sand Point Naval Air Station begins in 1920, in the wake of World War I. Seeking to build an airbase in Puget Sound, King County Commissioners and U.S. Navy officers broke ground on a site at Sand Point, near Lake Washington, then outside Seattle city limits.

Over the next several years, the air station grew. Bill Boeing tested his first airplanes from Sand Point. In 1924, it was chosen as the launch and end points for the first aerial circumnavigation of the world. In 1927, Charles Lindbergh landed The Spirit of St. Louis at Sand Point and was treated to a ticker tape parade in downtown Seattle. In the 1930s, Works Progress Administration projects to fill in Mud Lake and Pontiac Bay, as well as Civilian Conservation Corps building projects, enabled the Navy to increase the number of buildings to 17. During World War II, Sand Point served as the headquarters of the 13th Naval District which oversaw the front lines in the Pacific, and the air station’s population ballooned to 8,000 personnel.

After World War II, activity at the air station slowed considerably, and it was ultimately decommissioned in 1970. In 1975, a large portion of the air station’s land was given to the City of Seattle, which was eventually developed into Magnuson Park, named in honor of longtime U.S. Senator Warren G. Magnuson, a former naval officer from Seattle. Over the next few decades, the runways were demolished and some of the air station’s historic buildings were torn down; others fell into disrepair, their futures uncertain.

In the late 2000s, the Washington Trust for Historic Preservation joined with community groups like Friends of Sand Point and Sand Point Arts & Cultural Exchange (SPACE) to advocate for the preservation of Sand Point’s historic buildings, listing Sand Point Naval Air Station on our Most Endangered Places list in 2009. Those advocacy efforts led to Sand Point’s listing on the National Register of Historic Places in 2010 and to its designation as a historic district by the City of Seattle in 2011—making Sand Point Naval Air Station Landmark District Seattle’s eighth historic district, and the first one added in more than three decades.

Thanks to the Friends of Sand Point, SPACE, the City of Seattle’s Historic Preservation Program, Seattle Parks and Recreation, and many more community partners for their help in preserving these important historic sites.