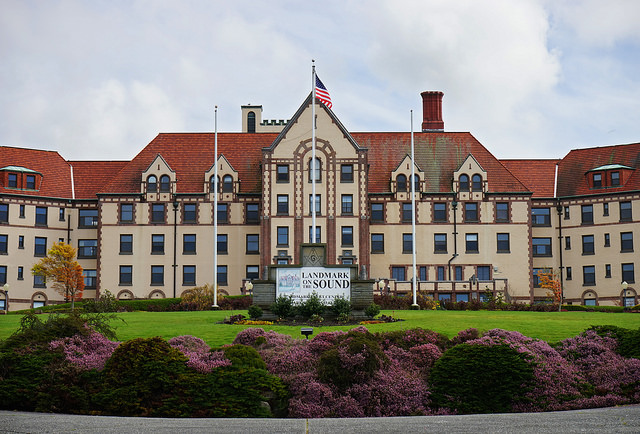 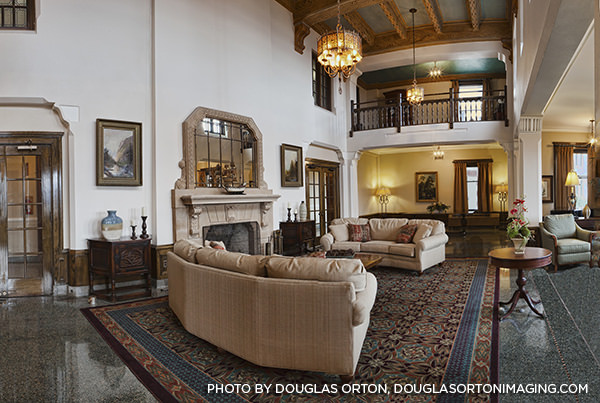 UPDATE: As of May 2022, the demolition review process is still underway and we need your help! Visit the Advocacy Alert page to take action today.

Completed in 1926 as a retirement community for members of Washington’s Masonic Society, the Masonic Home of Washington features box beam ceilings, hand carved woodwork, stained glass, and terrazzo floors throughout. By 2004, the Masonic Grand Lodge of Washington initiated plans to market the property as a traditional retirement home, open to Masons and non-Masons alike, but the economic recession put these plans on hold. Instead, the building, its ornate facilities, and beautiful grounds, was utilized as an event center hosting weddings, film shoots, and corporate meetings.

The property was put up for sale in 2013, and event center operations ceased the following year. It has been listed as one of Washington’s Most Endangered Places since 2015, and the property finally sold in August 2019 to EPC Holdings LLC for $11.5 million and was transferred to Zenith Properties LLC in November 2019. According to The Seattle Times, “The Masons submitted an application for a demolition permit in July 2019 as part of the sale. The city is currently waiting for additional materials from the current owners after they resubmitted the demolition permit application in September 2020.”

The building’s architectural features and exterior remain in good condition. Renovation of the building would require substantial investment as many of the building’s systems are outdated and in need of replacement. The building does sit on a large parcel of land that could allow the coupling of rehabilitation with new construction to potentially make the project more financially feasible.

Learn more about the history of Masonic homes in Washington in Adam Alsobrook’s essay, “The Three Masonic Homes of Washington State.” Following World War II, nuclear engineering programs proliferated at universities across the country, including the University of Washington (UW). Retaining a competitive Nuclear Engineering program, however, required construction of a research reactor. Designed in 1961 by The Architect Artist Group, known as “TAAG”, the Nuclear Reactor Building was a unique collaboration between the architectural and the engineering departments of UW.

Efforts to save the building from demolition in 2008 culminated in the nomination of the building to the Washington Heritage Register that same year and the National Register of Historic Places in 2009. Though younger than the minimum of 50 years that is generally required for listing, the Nuclear Reactor Building (constructed in 1961) was placed on the National Register of Historic Places because it demonstrated exceptional importance with its association with significant historic events, embodying the characteristics of the Modern Movement and representing the work of prominent Northwest architects. The building was also placed on the Washington Trust for Historic Preservation’s 2008 Most Endangered Historic Properties List. The earlier advocacy efforts involved the Friends of the Nuclear Reactor Building (consisting mainly of University of Washington students), Docomomo WEWA, Historic Seattle, and the Washington Trust for Historic Preservation.

In the Fall of 2014, the University unveiled plans to construct a new Computer Science and Engineering II Building on the site, which would require demolition of the Nuclear Reactor Building. Because of the building’s significance and the seriousness of the threat, the Nuclear Reactor Building was re-listed on the Washington Trust for Historic Preservation’s list of 2015 Most Endangered Places. In late 2015, Docomomo WEWA submitted a landmark nomination to the City of Seattle. The University of Washington, claiming it was not subject to they City’s Landmark Preservation Ordinance because it was a state agency, filed a lawsuit against the City of Seattle and also named Docomomo WEWA in the suit. The Washington Trust and Historic Seattle also joined the lawsuit as intervenors.

Preservation advocates lost the first round of legal proceedings in King County Superior Court. On April 14, 2016, King County Superior Court Judge Suzanne Parisien issued an order granting the University of Washington its motion for summary judgment in its lawsuit against defendants City of Seattle and Docomomo WEWA, and intervenors Historic Seattle and the Washington Trust for Historic Preservation. Although advocates continued to try to slow the demolition process, UW moved forward and the Nuclear Reactor Building was demolished on July 19, 2016. Despite the loss of the building, the fight to protect other historic buildings on state-owned university campuses continued on.

The Supreme Court win won’t bring back the Nuclear Reactor Building (may it rest in peace), but it can help save other properties owned by UW in the future and may serve as an important precedent for future cases regarding historic properties across the state. Universities not only manage their campuses, but they also own properties in downtowns areas in the hearts of Washington communities small and large.

Even though the building has been lost, we are honored to accept, along with our advocacy partners Docomomo WEWA and Historic Seattle, a Docomomo US Modernism Award of Excellence in Advocacy. 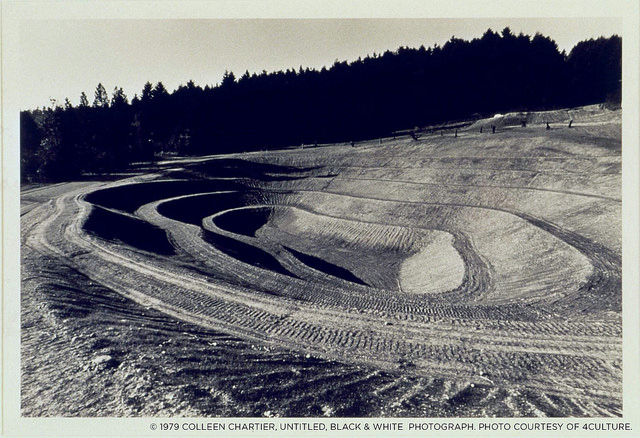 Created in 1979, the Robert Morris Earthwork is a 4-acre sculpture and public artwork, with significance as a pioneering example of land reclamation as art. It has garnered an international audience of scholars, students, urban planners, curators, and art enthusiasts. As part of King County’s Public Art Collection, Robert Morris Earthwork is open to the public from dawn to dusk on a daily basis, providing a contemplative open space and an extraordinary view to the Kent Valley below. Since its creation, the physical context of the Earthwork has changed dramatically as nearby urban development continues to expand. Encroaching development has also led to more abuse of the site, including vandalism and illegal dumping. Current funding from 4Culture, King County’s cultural development entity, provides for daily management of the site, but is insufficient for cleaning up vandalism, restoring the site from erosion, replacement of decomposing natural features, or new interpretative signage. 4Culture is organizing a campaign for funding toward site restoration, interpretation improvements, and to raise awareness for this important cultural resource. Built in 1911, the Longfellow School has a one hundred year legacy serving as both a school and as administrative offices for the Everett School District. Following construction of a new Community Resource Center in 2013, the District effectively retired Longfellow School, leaving it to serve a non-essential storage function. The District issued a request for letters of interest for the property and indicated a preference that the exterior of the building be preserved. The district has received several proposals that have included rehabilitation of the former school building, but they have all been considered not viable. Adding to the concern is the fact that the entire site is adjacent to the district-owned Memorial Stadium, which is used for a variety of school and community events. Advocates fear the perceived need for parking could trump a plan for rehabilitating the building. The Longfellow School site is large enough to accommodate new construction, an important element as the cost to rehabilitate the historic school may require a degree of new development to make the economics feasible.

A December 2016 Herald article about the impending demise of Longfellow prompted a miraculous donation of $3 Million to the Everett Museum of History to purchase the school for use as a museum. However, after several months of negotiations the deal fell through and the museum purchased a different property. In 2017 the Everett School District called for bids to demolish the Longfellow School and construct a parking lot. In July of 2018 the bids were put to vote by the school board. The lowest bid came in at $2.1 Million, about three times what they had estimated. This caused some hesitation, but in the end two directors voted in favor of accepting the bid and two voted against. A fifth director who supported the demolition had stepped down the previous week for health reasons. Only because of this the motion failed and the school received a stay of execution.

In early February of 2019, Historic Everett learned of plans by the Everett School District to bring a contractor in to the Longfellow school to salvage lights, doors, handrails, cupboards, etc. for surplus. They were concerned this move would make the building less attractive to a future buyer and saw it as an attempt at a piecemeal demolition. They decided to raise awareness of the issue by staging a “heart bombing” on Friday March 1st. A heart bombing is a public display of affection for a historic place, where balloons, flowers, and large hearts with personal love notes are attached to a building. The event garnered the attention of the press in advance of the school board’s vote on the issue, including a story in the Sunday Herald by popular writer Julie Muhlstein. In addition, Historic Everett ran a full-color half-page ad calling on people to write to the board or attend the meeting.

On Tuesday, March 5th, a large number of people showed up at the school board meeting to support Longfellow, including eight who spoke in its defense. Some of the community members promoted the idea of forming a committee of district people and citizens to study the problem of how to use the building. During the meeting two board directors made dramatic statements coming out as supporters of preserving the school, disavowing themselves of their previous votes to accept bids for demolition. When the issue finally came up three hours into the meeting, a long and tense debate was had between board members. Two directors who were on the fence were eventually persuaded that the salvage did not urgently need to be performed right away. When the vote was taken, only one director voted in favor of approving the salvage contractor, and the motion failed. Community support played a major role in defeating the school district’s plan.

March 7, 2019 – “Editorial: Longfellow decision may only put off inevitable”

February 7, 2018 – “Everett School District has had offers for Longfellow School”